As part of our service work we are often presented with difficult methodological and analytical problems and we are tasked with developing new methods to analyze the systems presented. Because our customers tend to be outcomes-based (typically for aesthetic concerns), we are able to develop more or less ad hoc procedures - based on existing science and protocols - that match the practical concerns of their products requirements. The SMS Scratch G5.5 Machine is designed for fundamental research and characterization of scratch and mar damage but is also capable of performing these practical comparative tests between systems. The goal for most assessments is to determine if there is a statistically relevant difference between the provided systems, and if so, to rank them according to performance.

Although a lot of older methodology persists, modern and reliable macro-scratch and characterization methods are well-defined and studied. Definitions for mar and scuff are less well-defined and tend to fall into a few major classes: mar-darkening, mark-lightening, multi-asperity roughening, scuffing, and a few other more or less industry-standard physical phenomena. Simple, single-valued outcomes measures for these differing mar types have been elusive. To date, the best metric defined has been "contrast curve" assessment. The basic procedure is as follows:

There are several issues with this method: 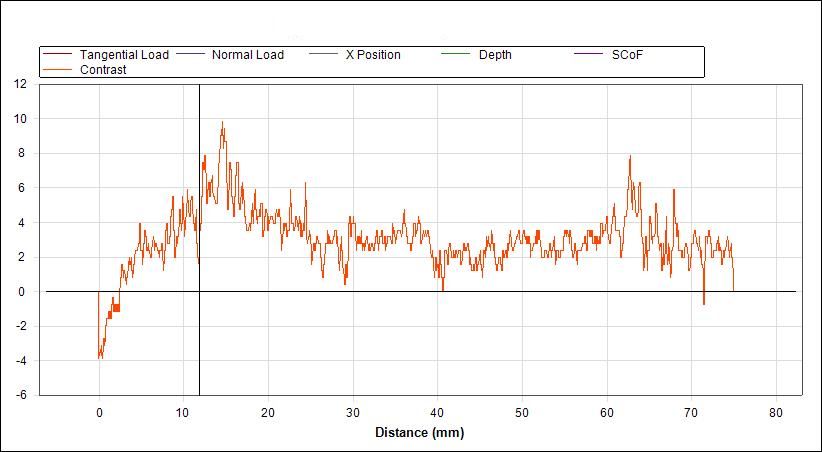 We expect to see a progressively increasing contrast curve. Instead, excess free parameters dominate the curve.
While the first two methods can be overcome via curve normalization, the last item and other weaknesses in the physical process result in wildly varying contrast curve results. It is also difficult to create useful performance assessment metrics for comparing heterogeneous curves. It is much easier to compare single values, which the well-defined scratch assessment techniques are designed to yield.

A client presented us with the exterior plastic of a product, with a specific need: reduce damage during manufacturing and shipping. The primary modes were product to product contact, and product to shipping container contact. In our first attempt, the products provided were non-homogenous off-white shades and semi-translucent. We used the prescribed high-asperity (2400 grit sandpaper, 7x7mm, mounted via foam-backed tape) styli and the contrast curve quantitative assessment technique. The results were unsatisfactory, and could not discriminate between the systems. This despite the fact that there was good evidence from human panels that there was a distinct performance difference between the two systems.

For material assessment of fundamental system properties, the recommended molding characteristics we recommend are as follows:

The customer took our recommendations and on their next run produced samples that met our requirements.

We had made several observations of the method and analytical issues surrounding practical mar testing and had formulated a plan for addressing both. With the customer's permissions, we modified the methodological and analytical process. The key insights we had were as follows: Our proposed solution was to use an older, less explored quantitative assessment method (visible proportion) coupled with a styli geometry more closely simulating real-world phenomena. Additionally, we determined that imaging parameters should be adjusted to maximize apparent damage between systems, rather than having a fixed set of imaging parameters. The justifications were as follows:

The efficacy of the test and analytical methods were immediately apparent. A small panel of human observers was first used to produce an a priori assessment of the test panels to level-set quantitative performance. Quantitative assessments showed clear discriminatory power and statistically relevant variance between the two systems, with acceptable variance between repeated tests within each system. The quantitative assessment matched the human observation. 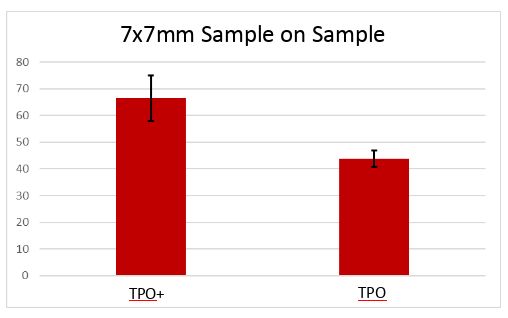 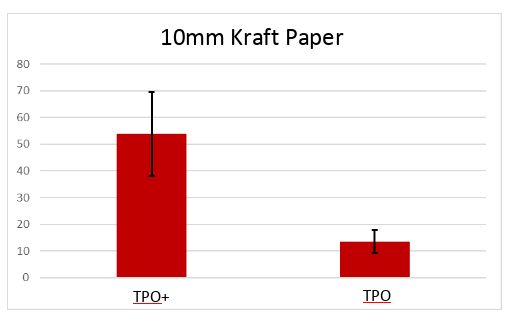 The proposed method is more flexible and more closely matches the damage modes experienced for practical applications of materials within common industrial settings. The methods are derivative of existing methods and are are really the application of carefully chosen parameters within the context of existing mar assessment protocols.

The analytical method is grounded within the existing quantitative methods for both mar and scratch (leveraging relative contrast), but produce a single value that is resilient to inter-test and materials variances and is much more easily comparable. The test proved resilient to small changes in color and gloss within the systems. Tests results were internally consistent within the same material, and showed clear discriminatory power between discrete systems that were suspected of having known performance differences.

The customer was able to show analytically that their improved system had quantitatively comparable and significant results. This resulted in quantitative performance assessments that they could use in their product line and were used in developing a patent for their additive technology. Surface Machine Systems was happy to have helped in their performance improvement process.

For non-textured, dark-colored, matte or semi-gloss materials, Surface Machine Systems endorses this methodology for comparative assessment of mar. This method is being validated and refined by the Texas A&M University PTC SCRATCH Consortium Lab and is currently available in our Tribometrics analytical software package.